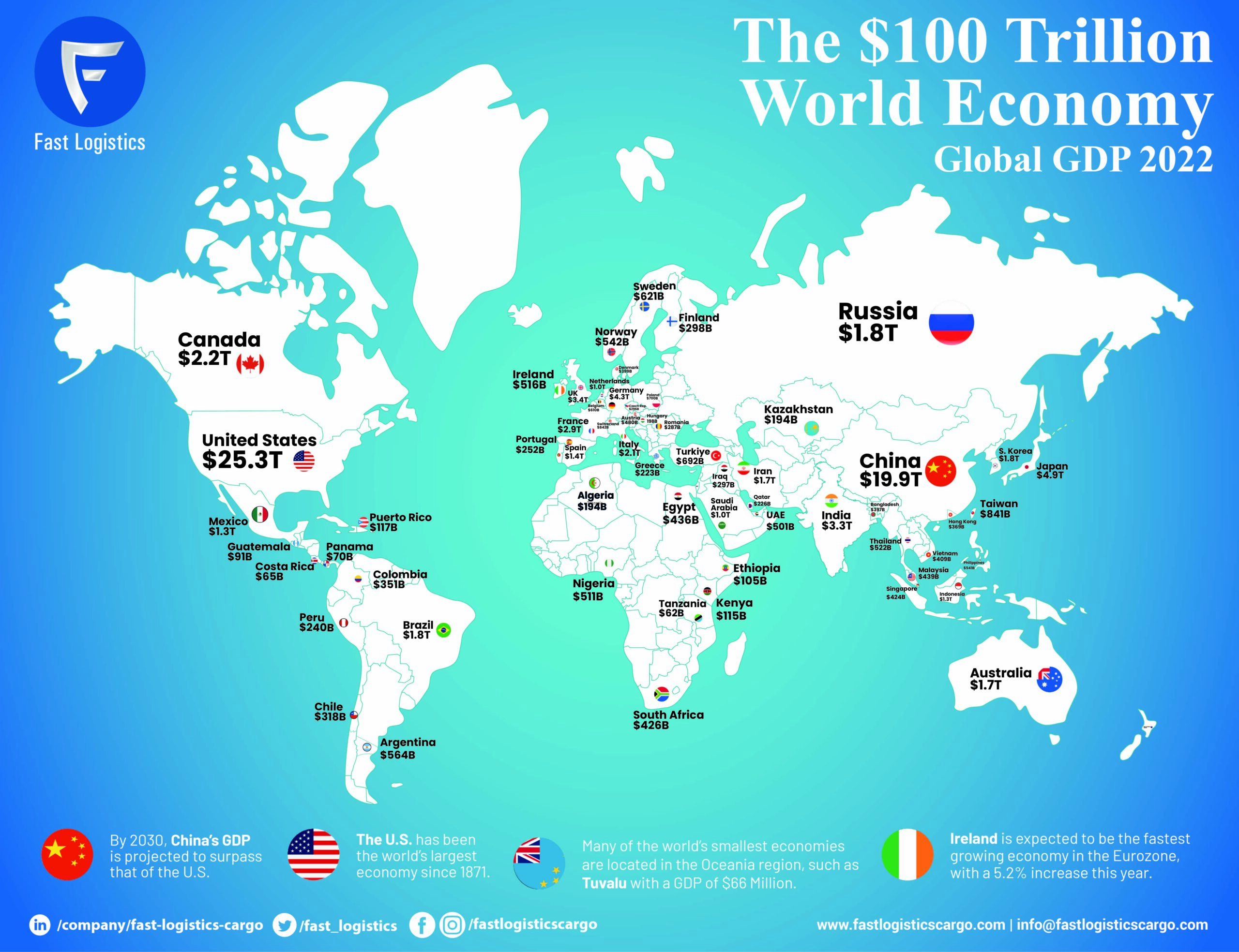 Gross domestic product (GDP) is the monetary value of all finished goods and services made within a country during a specific period to time.

Trade’s growing economy has resulted in expanding domestic and global markets for goods and services. There have been thousands of new goods and services created in the past, and today people can buy and use them everywhere in the world. The volume and complexity of business have increased in response to the difficulties posed by expanded markets and the growth of new products and services. Single plants have been replaced by multi-plant systems.

The distribution of products from point-of-origin to point-of-consumption has become an enormously important component of the Gross Domestic Product (GDP) of developed nations. Considering its utilization of land, labor, and capital, and its impact on the standard of living, logistics is clearly big business.

The global economy has now reached a new milestone by surpassing the $100 trillion threshold.

In 2020 the global GDP stood at $88 trillion, $94 trillion in 2021, and now, based on the most recent projections, the IMF anticipates that the global economy would reach approximately $104 trillion in nominal value by the end of 2022.

The recovery that was anticipated in the post-pandemic period appears strained, even though growth is still heading upward. Global economic estimates are being reduced because of recent conflicts, supply chain obstacles, and the ensuing inflation.

With a $25.3 trillion GDP, or approximately one quarter of the world economy, the United States remains the economic superpower. At $19.9 trillion, China comes in second.

Even though China’s GDP growth has slowed recently, projections show that it will surpass the US by 2030, replacing it as the world’s economic leader.

The Middle East and North Africa are one region that is anticipated to increase soon as a result of higher oil prices; Iraq and Saudi Arabia in particular are leading this trend. In 2022, it is anticipated that the region’s GDP would expand by about 5%.

Some of the world’s smallest economies were most hard-hit by the pandemic, and as a result, they have been most impacted by the inflation and food supply shortages brought on by the conflict in Ukraine.

In fact, certain nations, particularly emerging and developing economies in Europe, are projected to see negative GDP growth this year.

For instance, the GDP growth rate for Russia is predicted to be -8.5% in 2022, while it is yet unclear how the cost of the conflict and the more severe international sanctions would affect the nation’s economic prospects.

Although estimates of global economic growth have already been revised downward, it’s possible that things could get serious. Stagflation risks are increasing, according to organizations like the World Bank. Stagflation, which hasn’t happened since the 1970s, is described as an economy with growing inflation and flat economic output.

Consumer price inflation across the world is now estimated at 7%. To control the situation, central banks around the world are making it harder and more expensive to buy necessities by raising interest rates. As recent events in Sri Lanka demonstrate, low-income countries are particularly at risk to economic volatility.

In the race of excellence, there is no finish line

Technology is the future of logistics as it is pushing...